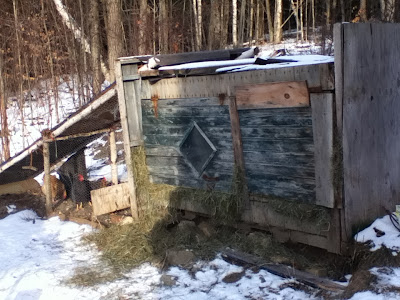 Because it's February and I'm in dream mode I decided to throw a chicken coop fest here at woodbird. It was really inspired by this funny, whip-smart woman who I don't even know named Molly Witters. Molly read about my coop dreams and sent me a photo of hers, an overturned and refurbished outhouse. Which combines two of my favorite architectural structures into one. Molly also appears to like the same kinds of stories I do, as you can see from her story of her coop which I've posted below. Thank you, Molly! (And keep posted for more coop photos and tales, or better yet, send me some.)

The Story of a Ripton Coop

The coop story starts in the ‘70s when Les Posdamer and Clarisse Shechter made a home on a south-facing log landing in Ripton.  Hand-hewed logs stamped with government issue made a 16 x 16 footprint.  And it needed a shitter.  Whenever I think about out-houses I think about this Brit man I worked for who published a whole book of British slang; the colloquial for sex was: “banging like a shit house door in the wind.”

Anyhow, the coop provided for those folks for a decade or more and then came electricity and plumbing.  After that  maybe it was only used when family filled the gills.

Pat and I bought the place in 2010.  I eyed the out-house from the start: sexy little shithouse with a book-shelf and a toilet bowl.  First we smoked bacon in it and that turned out really well, but I knew it had more in it than an annual pig.  That next spring we “carefully” tipped it over and dragged it a bit closer to the house.  Pat chain-sawed off the rotten bits and other parts too.  We used saplings that turned into trees the next season to make a run.

That’s how the “permanent” coop was formed.  We had a temporary coop that summer too.   That’s where we put the “mixed cockerels” to raise for meat.  It was on a sledge, with no bottom.  Well into cockerel adolescence the bear flipped it and munched 9 of 12.  We kept the survivors in the “permanent” coop for a time, but then they began to crow, and they joined the bacon in the freezer.