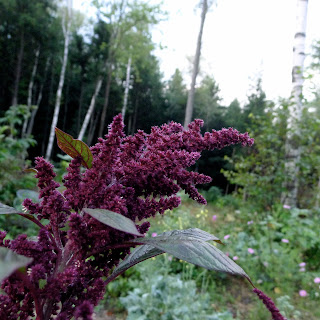 I think I must have been awoken ten times last night, by one child or another. Crickets raucous, rain heavy on the metal roof, and my brain pleasantly humming with this interview by Robert Creeley in The Paris Review. My favorite question and answer (about place, of course):

INTERVIEWER
You speak a great deal about the poet's locale, his place, in your work. Is this a geographic term, or are you thinking of an inner sense of being?

CREELEY
I'm really speaking of my own sense of place. Where “the heart finds rest,” as Robert Duncan would say. I mean that place where one is open, where a sense of defensiveness or insecurity and all the other complexes of response to place can be finally dropped. Where one feels an intimate association with the ground underfoot. Now that's obviously an idealization—or at least to hope for such a place may well be an idealization—but there are some places where one feels the possibility more intensely than others. I, for example, feel much more comfortable in a small town. I've always felt so, I think, because I grew up in one in New England. I like that spill of life all around, like the spring you get in New England with that crazy water, the trickles of water everyplace, the moisture, the shyness, and the particularity of things like blue jays. I like the rhythms of seasons, and I like the rhythms of a kind of relation to ground that's evident in, say, farmers; and I like time's accumulations of persons. I loved aspects of Spain in that way, and I frankly have the same sense of where I now am living in New Mexico. I can look out the window up into hills seven miles from where the Sandia Cave is located, perhaps the oldest evidence of man's occupation of this hemisphere. I think it dates back to either 15,000 or 20,000 BC. and it's still there. And again I'm offered a scale, with mountains to the southeast, the Rio Grande coming through below us to the west, and then that wild range of mesa off to the west. This is a very basic place to live. The dimensions are of such size and of such curious eternity that they embarrass any assumption that man is the totality of all that is significant in life. The area offers a measure of persons that I find very relieving and much more securing to my nature than would be, let's say, the accumulations of men's intentions and exertions in New York City. So locale is both a geographic term and the inner sense of being.

And there's my 10-minute morning for you. That line about shyness and the particularity of blue jays stills me. May your day (and night) also be filled with things that make you hum.