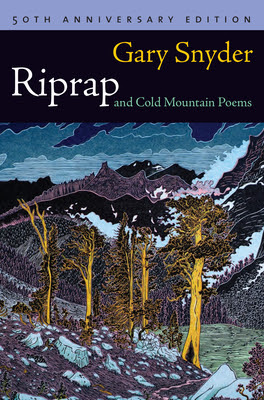 Thinking: Two nights ago I spontaneously hitched a ride to Cambridge with some friends to watch Gary Snyder receive the PEN/New England Thoreau Prize for excellence in environmental writing at MIT. I found Snyder (or his work found me) at an important time in my life (more about that here), and hearing him speak and read was like being doused with of all my eighteen-year-old dreams: live simply, cultivate a clear and attentive mind, spend as much time as possible out of doors, let poetry be a temple of words.

At some point during college I became disillusioned with poetry--the self-indulgence of the "I", the artificiality of broken lines, the pretentious absurdity of calling oneself a poet at the end of the 2oth century when only a small elite reads the stuff and it has (thus) little chance of saving the world or even bringing consolation to a broken heart in need--and so stopped feigning to write it.

But hearing Snyder reminded me how unpretentious broken lines of words on a page can be. Snyder was humble, funny, graceful. He read old poems and not-yet-finished poems. Some of them felt complete to me, some of them did not. Did I care? 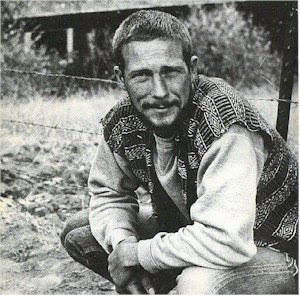 Not really. What resonated from his humble demeanor and squinting eyes and carefully chosen words was a deep reverence for the natural world and the written word; a deep sense of responsibility for the life we live and the world around us; a clear reflection of a life spent paying attention and trying to render that deep attention onto the page; and an astounding ability to not his life or his work too seriously. About Thoreau he said that he has had a long and complicated relationship with him: both admiring him deeply and wondering why he didn't just go out and get himself a girlfriend. The crowd erupted in laughter. I thought: I truly like this man.

At the end of the evening I broke my "buy-no-new" pact (again) to buy the 50th Anniversary Edition of Snyder's first collection, Riprap, which has now been combined with his translation of the poems of T'ang Dynasty poet Han-shan.

There are some wonderful poems like this one, by Snyder:

Down valley a smoke haze
Three days of heat, after five days of rain
Pitch glows on the fir-cones
Across rocks and meadows
Swarms of new flies.

I cannot remember things I once read
A few friends, but they are in cities.
Drinking cold snow-water from a tin cup
Looking down for miles
Through high still air.


And this one, by Han-shan, (a hermit poet who named himself after the place where he lived-- Cold Mountain):

In my first thirty years of life
I roamed hundreds and thousands of miles.
Walked rivers through deep green grass
Entered cities of boiling red dust.
Tried drugs, but couldn't make Immortal;
Read books and wrote poems on history.
Today I'm back at Cold Mountain:
I'll sleep by the creek and purify my ears.


There are others that seem unfinished, or not quite right to me. But the overall experience of reading the collection leaves me altered; I walk away from the page feeling more attentive and more reverent and more porous. Snyder writes in his afterword:

I grew up with the poetry of twentieth-century coolness, its hard edges and resilient elitism. Ezra Pound introduced me to Chinese poetry...The idea of a poetry of minimal surface texture, with its complexities hidden at the bottom of the pool, under the bank, a dark and old lurking, no fancy flavor, is ancient. It is what is "haunting" in the best of Scottish and English ballads and is at the heart of the Chinese shi (lyric) aesthetic...

Yes. All of which reminded me of this: that in poetry, it's as much the life, or soul, of the poet I'm after as the words on the page. I want to be taught how to live a good life. Reminded to be reverent. Reminded to live a life aimed towards true. That tin cup of snow-cold water brings me back into the moment in an astounding way. I feel it go down my spine and settle in the soles of my shoes. I feel it purify my ears.

And so I look forward to reading much more poetry. After all, I've got an unborn child inside me who I want, more than anything, to aim towards true and seek out the timeless "complexities hidden at the bottom of the pool...dark and old and lurking."