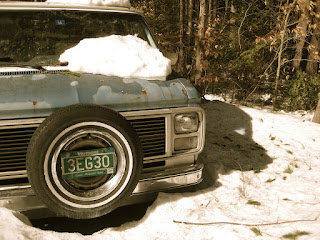 The 300 acres of family-owned land I live on in Southern Vermont is littered with defunct cars. They line driveways and perch outside barn doors and nestle between trees, all of them home to mice and spiders and trash in various states of decay. There’s the purple ‘47 Dodge that was given to my parents as a wedding present when they were twenty-one, the skeleton of an electric car my grandfather built in 1973, and the carcass of the Honda my cousin crashed into a tree five years ago after joining the Marines. There’s an array of old VW Bugs, diesel pickup trucks, and motorcycles. There’s my grandmother’s old blue and white GMC touring van, which she had my grandfather custom rig with a pullout bed, a fridge, and a pop-top. A few years before she died she said to me, “Jesus. I hope I never become the kind of woman who sleeps in hotels. That would just make me feel so damn old.”

I laughed, as I always did at what she had to say. Some people are just like that: fresh.

I used to sit in the cars. They were a young girl’s treasure troves: old maps, a pair of rotting Converse All-Star sneakers, a hand-carved wooden bowl sweet with resin. They were texts, too, about the places people go—Mexico, Alaska, British Columbia—and what they bring with them, and what they leave behind.

There’s a Chinook (a trailer perched on the back of a 1982 Nissan pickup truck) that my boyfriend and I drove to British Columbia in September of 2001 while breaking each other’s hearts. We found out about 911 in a gas station in Manitoba, and after that every car we passed waved. There’s the ‘81 Jetta I drove to Seattle at eighteen in search of some other kind of love. The one in which I first heard Dylan sing, “Lay Lady Lay.” The ones I parked by lakeshores back in high school listening to Emmylou Harris and feeling desperately alone. It’s a kind of lunacy, this junkyard. A refusal to let the ghost go. And yet it’s kind of real, too. It’s a kind of fuck you to the denial of having all your shit swept away, to keeping your woods pristine while junk yards fill up three towns over.

And it’s a kind of yes, too. Yes to these places we’ve been. These people we’ve been. To old lovers. To what’s happened. To letting it be written, right here, in steel. And it’s letting go, too; it’s watching our past rot and mingle with leaves and grass and mouse shit and mold. It’s letting our lives be written and be written over, until they’re just part of the landscape around us, home to new things. Entwine, enrich, pollute, surrender. Mice give birth in the seats, grass pokes through the floor, we grow old. Which says everything, really, if you’re willing to root around, get spider webs in your face, and, once in a while, sleep there.