The Year of Anti-Consumerist Living Lives On

A big thanks to Steve at the environmental blog Next Starfish for inviting me to share an essay I wrote back in early July, "The Year of Anti-Consumerist Living," on his site. I hope it sparks some interesting conversations. Feel free to check it out here!

PS: And I guess it's time to start making some confessions about my various "slips." I promise to post those in the comments section of Next Starfish soon. 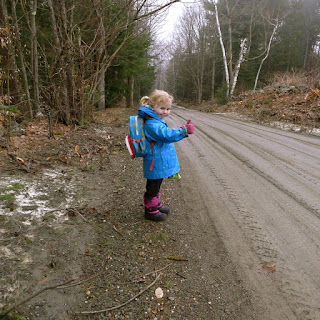 I’ve written about mud season before, (you can find that essay in the current issue of Orion Magazine), but it never ceases to amaze, or inspire. I live on a dirt road with two ways out, and this year the ruts leading both north on MacArthur and south on Fox are two-feet deep, making my car, (an efficient diesel that gets 50 miles to the gallon) land-locked for five days straight.

We do have a second car for just this reason, a rusty, low-slung four-wheel drive Subaru, but this week circumstances have convened so that Ty has needed that car to get to and from work. Which leaves Avah and I, in our small house in Vermont, without wheels.

This is the second time this has happened for an extended period of time this year. The first was after Tropical Storm Irene, which decimated the bottom three-hundred-feet of MacArthur Road. It was impassable even via Humvee (we know because the National Guard tried, at three AM, futilely, to get through), for about three weeks. If you had four-wheel-drive you could “get out” the other way: Stark to Fox to Ames Hill to Hinesburg to Carpenter Hill etc. etc. until, thirty-five minutes later, you found yourself in Brattleboro at a grocery store, where life seemed relatively normal.

But for those days and weeks after Irene we mostly chose to stay at home. And found: our lives slowed down deliciously. We lived without electricity, bathing in candlelight and drinking from jugs of borrowed spring water and falling asleep early. We took long walks through the woods to Sweeties, the one gas station/convenience store in town, where we snatched up their last bottles of milk and chunks of cheese. Then we walked home, another forty minutes or so, along the Old Mercedes, a logging road that passes the Phelps Cemetery, where our town’s first settlers are buried. We lay down amidst their jutting, tooth-like gravestones and nibbled from our hunks of cheese and ran our fingers along the engraved lines of their names. Eventually we made it back to a road, and back home. Our legs and our hearts and our spirits swelled: we were actually using our legs to get us somewhere we needed to go! We felt so vigorous, so youthful, so fresh eyed.

What made these footed journeys equally remarkable is that we passed neighbors along the way. Route 9, the snake-like two-lane federal highway that curves through our town, is normally a river of semis and out-of-state vehicles racing each other to the nearest ski destination. Most years there are one or two fatal accidents along its curves, and many more less tragic ones. Though I drive it almost every day, its name and dark pavement equate, in my mind and my body, a violent streak of too much and too fast. It’s somewhere I don’t want to walk, and wouldn’t dare ride a bike.

But after Irene large chunks of Route 9 were completely washed away, transforming it into a pedestrian walkway. Neighbors streamed by on bicycles; families were out with strollers and training wheels and bags of fresh bakes scones from Sweeties and, despite the tragedies of the storm, bright smiles on their faces. When had any of us ever walked this road, claimed it as our own, and when would we ever again?

Of course, it didn’t last long. Tourists found ways to get through, and our Governor brought in road crews from around the country to make a miraculously fast fix of the only east-west road through this part of the state. Soon there were trucks again, and gape-mouthed tourists, and no one dared bike or stroll their babies along the cracked, black pavement.

And the dirt roads got fixed, one at a time, as well. After a week or so we could get our Subaru out via Stark and Ames Hill, and did so. We raced to the grocery store as if we’d been famished, as if our gardens weren’t bursting with potatoes and carrots and squash and kale; as if our cupboards weren’t full of dried beans and our freezers well-stocked. We fled our quiet lives as if they’d kept us captive, as if our deprivation had caused true suffering. Then the electricity came back on and we once again streamed movies on Netflix and cruised Facebook voraciously and responded to all our hitherto unanswered e-mails. Avah asked several times to walk to Sweeties again and we told her, “Yes, let’s do that! That was so fun!” But never did. The storm passed quickly, and its repercussions passed, on our hill, as well. Life got back to its speedy, over-jived normal.

Which is why, when mud season comes around each year, I find myself feeling, amidst the frustration and absurdity and logistical challenges, grateful. This morning Avah and I caught a ride on the elementary school bus to her preschool (with none other than her intrepid Grandma Gail—my mom—at the wheel). We weren’t the only ones who’d thought of that. Several other neighbors had parked their cars on solid ground and were hitching rides on the bus. My three-year-old daughter could not have been more ecstatic—the school bus, to school! And the faces of neighbors were bright as well—with ingenuity, and humor, and the communion that takes place when communities face challenges and work together to overcome them.

My daughter and I hopped off the bus in the center of town and I hitched a ride halfway back home and walked the rest. I still haven’t figured out how I will pick her up, two hours from now, but feel sure I’ll be able to. I feel bolstered by the exhilarating jolt of freedom that comes from doing without, and the fun of needing to use ingenuity, or muscles, or both.

Of course, I don’t really want it to be like this forever. I was raised in a house without electricity or indoor plumbing and grew up driving cars that were incessantly breaking down. That upbringing has immunized me from over-romanticizing the simple life. But the occasional reminder to slow down, and do without, and get creative? That I’m almost always grateful for. And so now I’m off to call around for a ride, and if I can’t find one, get my seven-months-pregnant butt out the door and start walking. 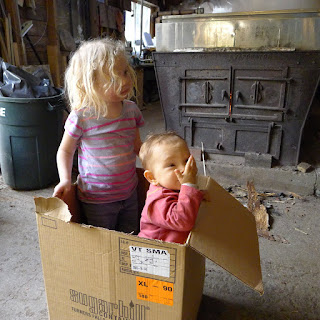 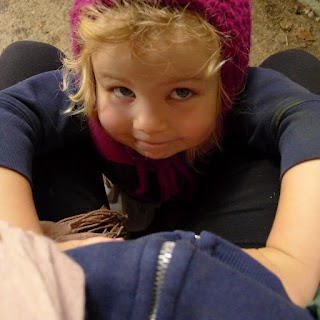 What childcare looks like around here. And what Avah looks like from the angle I most often see her from these days: glancing up after smothering my ripe belly in love-doused, sticky-cheeked kisses. 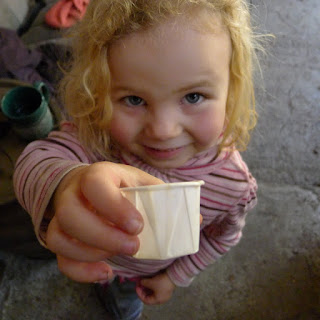 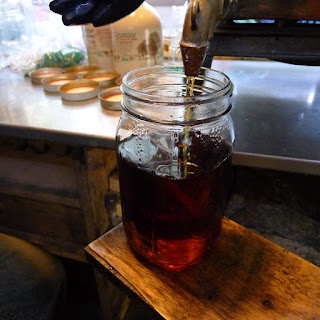 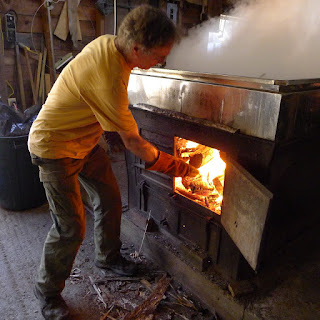 'Tis that time of year again: sugary sweetness sticking to our cheeks and coats and pants; warm, melting, dripping days complemented by the sugar-house-fire's heat and steam; mud--so much that I had to turn my car around and go borrow a four-wheel-drive in order to get where I needed to go; and tonight, yes, pizzas, grilled fresh on the evaporator door. As Avah says, "Spring is here! Spring is here!"