The Year of Anti-Consumerist Thinking 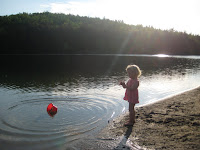 A few months back our friends Doug and Erika announced that they were challenging one another to a year of buying-nothing-new. They posted a Wikipedia link to the rules of a social and environmental movement called “The Compact,” initiated and named by a group of friends in San Francisco. The Compact is not extremist; one can buy food and anything necessary for one’s health or safety, essential supplies such as brake fluid and toilet paper, anything second hand, and even download music and keep one’s subscriptions. Radical but not insane. I thought, briefly, about joining them. But I excused myself by (quietly) proclaiming that I’m not really much of a consumer, anyway; that I haven’t bought a pair of new jeans in two years; that I can count on my two hands (literally) the number of things I’ve bought new for my two-and-a-half year-old daughter during her lifetime; that it wouldn’t change the world, me not buying the little I do. Plus, I said, also quietly, I have a penchant for buying myself the occasional pretty thing. Don’t I deserve that?

Then, yesterday, I came across an article in the current issue of Orion magazine by Scott Russell Sanders entitled “Breaking the Spell of Money.” In the essay, Sanders argues that in order to fix our economy and our environment we need to break our cultural mythology of wealth. He writes, “Money derives its meaning from society, not from those who own the largest piles of it. Recognizing this fact is the first move toward liberating ourselves from the thrall of concentrated capital. We need to desanctify money, reminding ourselves that it is not a god ordained to rule over us…We need to see and to declare that the money game as it is currently played in America produces a few big winners, who thereby acquire tyrannical power over the rest of us as great as that of any dictator or monarch…and that the net result of this money game is to degrade the real sources of our well being.”

Sanders goes on to quote Victor Lebow, a retail analyst who wrote, in 1955: “Our enormously productive economy demands that we make consumption our way of life, that we convert the buying and use of goods into rituals, that we seek our spiritual satisfaction [and] our ego satisfaction in consumption.” Sanders continues by saying that, in America, consumption has become compensation for whatever else might be missing from our lives, such as meaningful work, intact families, safe streets, a healthy environment, a nation at peace, leisure time, neighborliness, community engagement, happiness, and “other fast-disappearing and entirely vanishing boons.”

By this point I knew I was in.

I thought back to my initial reaction to the pact. Sure, I don’t buy much new stuff. But how much to I relish the limited buying that I do? How much do I equate that buying with self-love? How giddy do I become? And fanatic? And confused, and slightly crazed? I realized, reading Sanders’ article, that my resistance to “the Compact” proved that I am, by no means, immune from our cultural materialistic (and corporate-imposed) fetishizing, that my resistance was a sign that my own sense of spirit and ego is, indeed, entwined with consuming, at which point I walked outside and told my sweetheart we were in. No buying anything new for an entire year. Starting next week.

The Wikipedia of The Compact outlines the movement’s goals:

1. To go beyond recycling in trying to counteract the negative global environmental and socio-economic impacts of U.S. consumer culture, to resist global corporatism, and to support local businesses, farms, etc;

2. To reduce clutter and waste in our homes (as in trash Compact-er);

3. To simplify our lives (as in Calm-pact


It also lays out the rules:

“Members of The Compact are only allowed to buy underwear, food, and health and safety items such as brake fluid and toilet paper. During their one-year vow the Compact members must shop only at second hand stores. They can also barter or simply share with each other for goods they want. Members of the Compact frown upon material consumerism. However, they are allowed to use services such as movies, theaters, museums, massages, haircuts, and music downloads.”

As I said earlier, this is a radical but not undoable pact. It is not like the sensationalist carbon-zero activists who refused to use toilet paper or take public transportation for a year. It is, instead, a very simple commitment that many of us, without much sweat, could (and can) do. I, for one, am most interested to discover the subtle ways in which it does (or does not) affect me. What will I learn about my own desire? About my attachment to materialistic things and the act of consumption itself? And what are the unexpected, positive outcomes? Already it has brought our household a sense of purpose; this unobtrusive but publicly assertive statement about values is a way to make not-having an active state as opposed to a passive one. A way to affirm and recognize one’s impulse towards simplicity as a choice rather than a result of circumstances.

And it excites, also. When I was a kid I rarely bought new clothes; thrift stores were the treasure troves of my life, a cheap and environmentally friendly way to get my materialistic buzz on. Our household frugality also encouraged creativity and resourcefulness; if I wanted a certain kind of bag, I made it. If I wanted a new bed, or doll house, or desk, I convinced my dad to help me build one. It’s a kind of resourcefulness I want to teach my daughter, and re-teach myself as well; it encourages us to be creative with our materialistic impulses and to alter our aesthetics to match our environmental and social beliefs, rather than having our aesthetics determined by a corporate society we proclaim to hate.

I’m not swearing off buying new things forever—I enjoy and plan on, in the future, supporting my local businesses. But for now I want to learn how to accurately differentiate between wanting and needing. I feel inspired by the challenge of making next winter's Christmas presents and scavenging thrift stores for a raincoat for my daughter. And I’m excited to discover how the pact will (or will not) effect our family’s holidays, finances, time, productivity, levels of satisfaction, relationships and happiness.

I have always believed that limitations make us happier people; that the cause of so much of our cultural angst is the limitless possibilities that flower before us at every turn. This will test that theory. I may end up in tears in late winter, crooning after some pretty, spring-escent, aqua-colored dress. But for now I can say this: that since committing, my life feels simpler, saner, more purposeful, more clear, more directed, more exciting, more integrity-filled, more youthful and more free.

Why on earth would I trade a few things for all that?


To join us in this pact, or find out more, visit: http://en.wikipedia.org/wiki/The_Compact